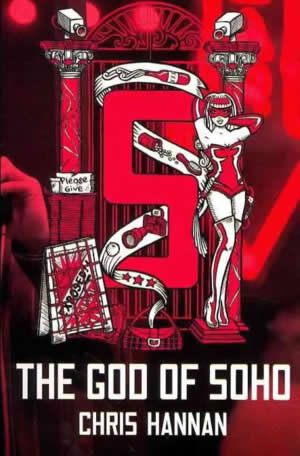 "The state of things in heaven and on the earth. And the reasons why.  An inquiry.  There's a lack of loveliness in the world.  There's a mood.  It's like a giant rubbling around the cities of heaven and earth, crushing shops and cathedrals and stadiums beneath its feet as it searches for something lovely, having not the smallest idea what loveliness looks like."

The play begins with the expulsion from heaven of Clem the goddess of love.  Her lover has been unable to make love to her unless she wears stockings and she is banished to earth, robbed of her sexual power and confidence. 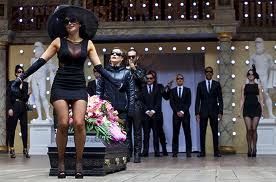 Meanwhile rock star Baz and the self-loathing reality-TV star Natty are tearing pieces out of each other in the tabloids.    On the surface they are just like any other celebrity couple, obsessed with their own image but on closer examination we discover they are in love with each other.   The problem is they express their love through physically violent sex, they don't know any other way to do it.   The only kind of sex that arouses them is the kind that involves inflicting pain.

Baz is coming to see that this can only end badly and he wants (or half wants) to try something different - but Natty isn't interested.  She can't do nice.

Sexy, insane and real, this is an extreme love story. 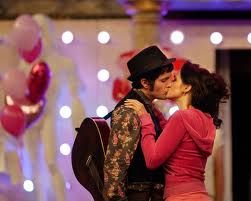 The God of Soho got a pretty thorough kicking from the critics - but other of my plays have enjoyed warm critical praise so it ill behoves me to make any complaint.

I'm happy to stand by the piece.  For one thing I enjoyed so many of the performances - Emma Pierson embraced Natty's viciousness with such inventiveness and glee, Jade Williams was awesome as her sister, and I fell in love with Ed Hogg as an actor and a man.   But I feel bad picking out those performances because there were others every bit as wonderful; Iris Roberts for instance was brave and lovely as the goddess of love...and I could go on.

I adored the production number at the showbiz funeral scene.  It brought the house down every night - the music, the choreography, the design, everything that was best about Raz Shaw's production came together in a moment of huge energy and punch.

But what was it all about?

The critics found it incoherent but that is largely because they were led to expect a satire on celebrity (it isn't) and were unanimous in thinking the satire was weak (yes, because it isn't a satire).

This is a play about two couples who are torn apart by the fetishism that has taken over their intimate private lives, and that seems like territory we need to explore. 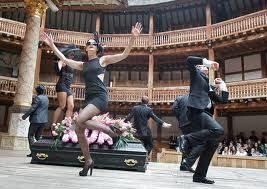 "As exhausting, baffling and punishing an evening as I have endured all year...  It is a huge relief when this noisy and often downright dotty show finally grinds to a halt."
DAILY TELEGRAPH

"It's a mark of the chutzpah of playwright Chris Hannan, director Raz Shaw, and indeed everyone involved in The God of Soho, that the big song-and-dance number at the heart of the show has the cast joyously declaring: 'We are so shit.'  Are they writing their own review?  Certainly there are moments when Hannan's jaggedly poetic script lacks clarity, when the examination of celebrity culture feels less than insightful, and when the abundance of naked flesh and fetish gear becomes gratuitous.  But that rumbustious verve is also one of the show's appealing features, along with a cast of larger-than-life characters whose fragility and longing for love make them more compelling than repellent."
THE GUARDIAN

"The casting is superb...  Best of all though is Hannan's writing, which is dense, beautiful and shit-spattered."
TIME OUT

"Raz Shaw's vibrant sensational production is a catalogue of sex, strutting and fetishism, but it never loses sight of an exemplary purpose."