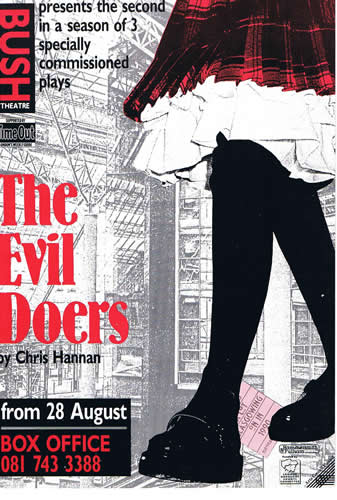 Tracky is a teenage heavy metal fan with an alcoholic mother, a taxi driver father and a best friend who's after the loanshark who's after her father.

The father has started a new business as a tour-guide, and his crazy optimism deeply antagonizes his daughter. All day long she sets about sabotaging him - furious that he is unable to solve the fundamental problem in their lives - his alcoholic wife and her alcoholic mother.

Throughout the mayhem of the day she grabs onto his coat-tail and will not be shaken.

The result is a chaotic comic odyssey through the streets of a modern city which concludes in a violent epiphany.

First produced at the Bush Theatre, London, on 30th August 1990, it won a Time Out Award, a Plays and Players' Critics Award, and that year's Charrington London Fringe Award for Best Play. 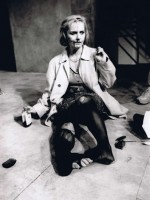 In the late 80s I wanted to write a play set in Glasgow knowing that in 1990 Glasgow was to be the European City of Culture and there would be a lot of journalistic focus on the city, both at home and abroad. It was a hook.

I was enjoying the energy of Jacobean City Comedies at the time and the narrative drive they generate through writing for the open space. Those plays move freely through space and time, they go wherever the story needs to be, and I re-cycled some of their techniques to help me create a chaotic running dogfight round a city.

The story began with Sammy Doak and his city-wide Taxi Tours, then I had the idea of the daughter who hated him and wanted to sabotage his business, and finally I came up with the thing which was driving these characters: the alcoholic who dominates their thoughts.

An alcoholic is not someone who drinks too much; an alcoholic is an emotional whirlwind, a destructive force which tears up everything in his or her path, and then passes, disappears, utterly unaware of the devastation caused. The Evil Doers is about the whirlwind and those in its path.

Best moment in the Bush show? Dougie Henshall and Katy Murphy stole the reviews with seductively funny performances; and I don't think I've seen the MIND of an alcoholic better played than it was by Alison Peebles.

But watching big Tom Mannion in the last scene, all bloodied after being beaten up by the loanshark, and full of dignity and acceptance as he explains to his daughter the uselessness of loving her alcoholic mother, was one of those times when you are not watching theatre but a quietly momentous event in someone's life.

"Uproariously funny.. .  He has a sharp eye for flaky characterisation and a wonderful ear for quirky vernacular dialogue, a sawn-off language of violent verbal collisions, like a pile-up on the motorway…  We never quite stop laughing but it becomes increasingly painful to do so, and I suspect that no-one will be able to watch the bruising final scene without physically flinching."
Daily Telegraph

“A gorgeously enjoyable play. As in the comedies of Ben Jonson and Middleton, the hunt for money gives the play its structure. Like Jonson and Middleton also, Hannan owns a penetrating eye for tricks of character and an equally sharp ear...   A world of uncertain egos where the characters bounce off each other like bumper cars, powered by sources beyond their control.”
The Independent

“A vicious and idiosyncratic city comedy.”
The Observer

"The verve, the iconoclastic humour is tremendous, each character brilliantly personalised."
THE HERALD

“No plot description can explain the beauty, warmth and poetic energy of Chris Hannan's The Evil Doers. In its generosity of attention, its expansiveness and richness, in the scale of its emotional intensities, it is as broad as a city itself. It is a modern masterpiece.”
ENCORE THEATRE MAGAZINE