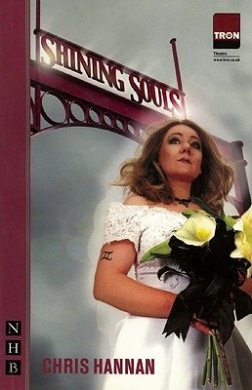 Think of the carnival atmosphere of the Day of the Dead transferred  to the streets of Glasgow.

At half six in the morning Charlie, who's homeless, turns up at his wife's door to borrow some dough. When his wife is reluctant to part with any of her small amount of cash, he pitches her the story that his mother is dying and he needs the money to get to the hospital - a story which has him in tears. Later, on this metaphysical day, he finds out his mother really is dying. Instead of going to see her he spends the day losing himself among strangers.

Meanwhile it's Ann's wedding day. She's haunted by the double-suicide of her sons. Her past is a Pandora's Box of horror and loss and today is the day it gets opened. Ten weird and wonderful characters - including Charlie - get caught up in the ensuing pandemonium. All day they seem compelled to invoke worlds beyond this one - until finally, before dusk, they cross to the other side.

The result is a play that transcends lunacy.

If an actor playing Bottom in A Midsummer Night's Dream comes to the director worried that the audience just won't believe it when he wakes up with an ass's head, the director can offer him some reassurance based on past audience behaviour; but who knows if an audience will believe some totally made-up modern fiction?

In Shining Souls I wrote a contemporary play whose heroine has a backstory like a Greek tragedy, and whose homeless hero is so at the edges of his own consciousness he can scarcely comprehend himself. There are also two characters called Billy, both in love with the heroine who can't make up her mind between them.

It is not social realism.

Luckily for me each production of Shining Souls has had actors who didn't waste any time discussing the play in any kind of cerebral way.  Always they have dived into the fictional situations without any of the throat-clearing and punditry that usually characterize the first days of rehearsal.

Just as well.  Though the drama is set in a gritty working-class part of Glasgow, the action is, in the broadest sense of the word, religious.  Roughly in the way Greek tragedy is.  It's like the characters are involved in a ritual or something, driving the play towards a moment of transformation.  The language is a very heightened demotic that's transfigured by the yearnings of the characters and the extremity of the situation.

Weirdly, audiences accept it without any quarrel.

"All ten actors are alive to the comedy and the sublimity of the play.  Thanks to them and to Hannan, Shining Souls leaves a lasting light in the mind unlike that cast by any other play I can recall seeing."
FINANCIAL TIMES

“Chris Hannan's Shining Souls is an extraordinary play, an angry questioning shout of a play which should not work but somehow does.  And powerfully too..”
EVENING STANDARD

“Imagine soap opera transposed to the streets of Glasgow and written by a modern, Buddhist Shakespeare.”
THE GUARDIAN

“It adopts a bold, episodic structure, like a kind of Bartholomew Fair for our times...  And the piece of theatre that emerges is a funny and serious postmodern masterpiece, full of magnificent one-liners.”
THE SCOTSMAN

“These murky miserable lives are expressed with such grace and vigour that the most ordinary statements become events of great beauty.”
SUNDAY TIMES

“Truly a thing of wonder...a sad, beautiful and profound piece of work.”
THE HERALD