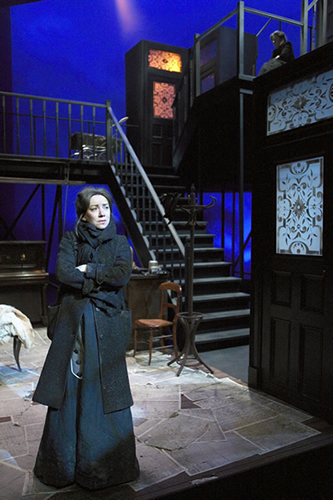 A Marie Antoinette of the slums, Elizabeth Gordon Quinn refuses to learn how to be poor, priding herself on the piano which sets her apart from her working-class neighbours, even though she cannot afford to eat.

It's 1915 and there's a war on. When the entire city rises up in defiance of the government and goes on rent strike, Elizabeth stands alone.  What price will she and her family have to pay for her individual stance?

The first production in 1985 had three things that were fantastic about it. One was designer Dermot Hayes' stark white set. Given the references to dirt and poverty in the script this was counter-intuitive.

But although the play is set in a tenement it's not a "tenement play". Elizabeth is contesting the reality in which she lives - Dermot's design helped us to focus on this contest.  Also, the more attempt there is to create a living-room, the more the piano is liable to look like just another piece of furniture. On a more abstract set it has an aura. Poetry.

The second great thing was the commitment of Eileen Nicholas to the character of Elizabeth.
Eileen is a fiercely intelligent actress but, in addition, she identified with the character. She was brought up by working-class members of the Communist Party. It was pretty unusual in 1950s Glasgow to belong to an optimistic household which believed in the future happiness of the working-class once the dictatorship of the proletariat had been established; it would have been a minority belief in 1950s Soviet Union, I imagine.

Her childhood was as happy as a Soviet pioneer's but when she was confronted with the part of Elizabeth Gordon Quinn she was able to make a very strong connection with a woman who had an alternative belief-system to those around her. She didn't see the character as an eccentric, at least she didn't play her that way; she grounded Elizabeth's detachment from reality in a rock-like certainty. She really was wonderful.The third glory of the production was Ralph Riach as her husband. The depth of his love for Elizabeth was awesome. When he withstood her verbal destruction of him at the end of the first half, and then took his leave of her saying, "I cannot be both your clown and your husband", he left the audience in tears.

"You expect that a play set in the Glasgow rent strike of 1915 will be a model of dour social realism but Chris Hannan's new play confounds all expectations. The result is both startling and provocative."
The Guardian

“A most unusual, rich and many-layered work”
SCOTSMAN

“Like Beckett’s tramps Hannan’s characters are sometimes ironically aware of being in a play and they explore the invention of language, its power to dramatize circumstance and self... Language is Elizabeth’s weapon against reality.”
THE TIMES

"Elizabeth Gordon Quinn is clearly a monster of snobbery and false consciousness, pathetically deluded about her own life, but what makes the play  memorable is the generosity with which Hannan also allows us to feel the heroic side of her personality."
THE GUARDIAN

“One of the most intriguing characters of the modern stage.”
THE LIST